Kumbh Mela Is So Much More Than A Religious Gathering 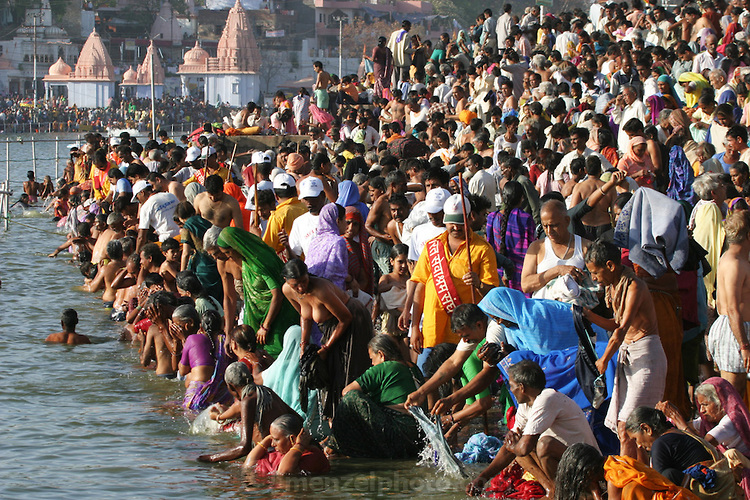 If I tell any modern age person to believe in the fact that by bathing in sacred river during specific dates can wash away all their sins, this information may not intrigue them.

But, the way the kumbha mela is still celebrated by Hindus and still remains the largest congregation of humanity on earth will indeed make the current generation curious to know more about the grand event. Nobody knows when was the exact time this festival was initiated. What remains unchanged over these years is that these massive gathering has taken place since ages and nothing till date has come in the way of this glorious festival of faith and joy.

It is indeed ironic to know that such a festival has also survived the modern age of logic and skepticism and people still attend the Kumbh Mela in large numbers. Let’s dive into the sea of Kumbh Mela to know that apart from the Hindu rituals what else takes place at the massive gathering.

1. The Meeting and Exchange of Thoughts Between The Hindu Spiritual Leaders

Kumbha Mela is the only place where all the hindu holy men, spiritual leaders and devotees converge to celebrate faith. It is a gathering where meet and exchange their divine thoughts. They discuss various ideas to restore faith of modernized human beings in spirituality. From Shankaracharyas to Naga Sadhus, all the holy men congregate to celebrate faith. Kumbh Mela gives an amazing opportunity for devotees to know more about their culture and to gather some knowledge from the holy legends. It is the best time for people to begin their spiritual journeys and awaken themselves.

2. Educating The Masses About The Ideal Way To Live Life While Living In A Modern World

The current life in the modern era is undoubtedly stressful and the generation has certainly forgotten the ideal lifestyle to follow. Gatherings like Kumbha Mela, exposes the general crowd to great masters who follow the Sanatana Dharma. This way the common man has an opportunity to learn about the principles of Dharma and wake up his soul to walk on the path to salvation or nirvana.

Also, various social issues can be discussed on a larger scale and views of the great spiritual leaders can be taken which could further help in nation building and finding the solution of bigger problems in a more simplified way within boundaries of our rich culture.

Yoga is an ancient physical, mental and spiritual practice that is directed towards the union of mind, body and soul. One may find thousands of people performing Yoga inside the Kumbha Mela Kshetra/zone. Kumbha Mela gives a chance to the world to learn this ancient and the most divine form of practice that leads to spiritual awakening. Yoga practices are based on various schools of thoughts and Kumbha Mela witnesses a congregation of people performing the several variations of Yoga. From Hatha Yoga to Raja Yoga, the great yogis from throughout the world assemble at the Kumbh Mela in India.

The Simhastha Kumbh Mela at Ujjain in 2016 gives the world a golden opportunity that should not be missed. Yoga Kumbha 2016 will be held during the Simhastha Kumbh Mela where the great Yoga Masters, spiritual leaders and philosophers from across the globe will gather to share their wisdom with the world. With hundreds of seminars, workshops and conferences to be held during the Yoga Kumbha 2016, people will get a chance to explore the less known world of Yoga, the science related to it, its different forms, techniques, new modifications, and research work done in the field.

There are plethora of challenges which are faced by the organisation authorities during Simhastha Kumbh Mela. Handling the crowd, food, security, housing, and transportation for one of the largest gatherings in the world is a huge task in itself. It is indeed an opportunity for people to learn and witness about how the authorities manage each and everything so well at the Kumbh Mela.

In recent times, some of the best technologies have been used to manage the basic needs at the Kumbha Mela that include thousands of CCTV Cameras, drone cameras, geo fencing, ozone cleaning of rivers and many more.

Kumbha Mela is one of the best place for people who are on their path to self-discovery. Living in an ephemeral town for a month-long celebration of faith and spirituality can lead to opening of the gates of higher consciousness for an individual. The air, water and the environment as a whole is filled with positivity that has a divine effect on an individual’s soul, washing away all their sins and filling their lives with positive vibes.

The Yoga Kumbha Camp during Simhastha Kumbh Mela is also making arrangements for safe holy bathing for its guests in the Kshipra River at Ujjain.